A great place for fresh air ! Drink in great views of the Chaîne des Côtes mountain range and Luberon in the background. 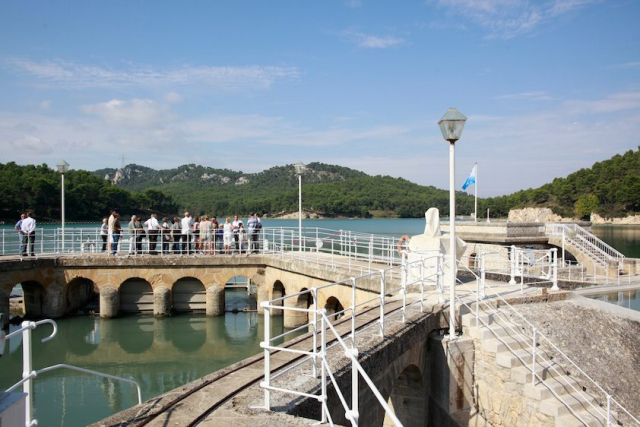 Saint Christophe Reservoir was designed by Montrichet and built after the architect's death in 1882. It is one of three key Marseille Canal structures to settle its water.

In its time, the 20ha reservoir set the benchmark for water settling. What sets this structure apart are the parallel mounds at the bottom, known as "saddles", to aid settling and dredging. Look at the mounds that form darker shadows on the edge and look like whales under water...

What's also unique about it is the tricky task of keeping the water level constant despite flooding after storms. It has twice the water capacity of Marseille's Old Port !

Warning: for safety reasons, access to infrastructures, the shores and swimming are strictly forbidden.

Next to the Chaîne des Côtes mountains at the foot of the Durance RIver, water reigns in La Roque d’Anthéron. That's not always true of Provence and it's probably because locals settled in lots of different hamlets throughout the Middle Ages. The many fountains in the village explains why there are so many springs.

The Durance is a hot-headed river whose bed changes with the seasons and gave people the chance to harness its water and power. The first canal was built in the lower part of the village to supply water to the old mill at the foot of the castle.

Montrichet built his 84km canal and 84 structures taking the Durance's water to the Palais Longchamp in Marseille in 1847 during a major drought. His structure was a unique technical feat at the time. It is still Marseille's main water supply.

More recently, the building of the canal producing electricity is the latest addition to these waterways.

Not to be missed !

A unique annual opportunity to delve deep into the dam and take in the reservoir at your leisure: the Marseille Water Company opens the doors to visitors during the Heritage Days on the 3rd weekend in September!

Learn the secrets of water treatment on a 1 hr guided tour about settling the Durance water and producing drinking water.
Booking compulsory, for further information.