Sainte Anne Chapel stands in a natural haven on top of the Chaîne des Côtes mountains. It's a calm and relaxing place... 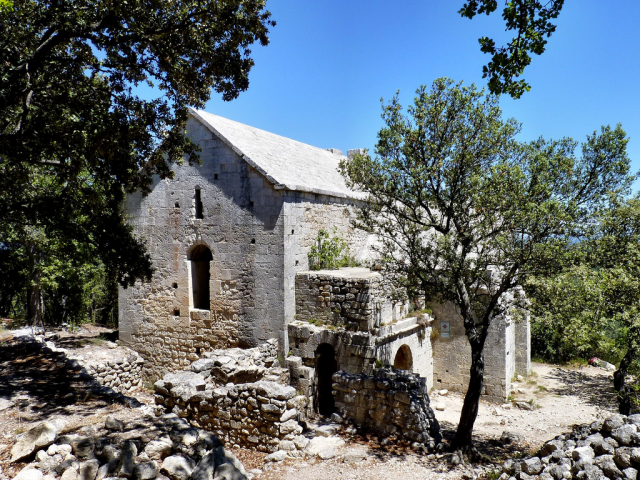 The Romanesque chapel was built in the 11th century by the precursors of Silvacane monks on a pagan site on the Manivert plateau overlooking La Roque d’Anthéron village. Take your time gazing at the amazing views of the region.

The chapel was initially devoted to St Mary before it was taken over by the Benedictine Saint André Abbey in Avignon then passed onto the Cistercian Silvacane Abbey then the Aix Chapter. It wasn't until the 16th century that the chapel was devoted to Saint Anne and became a pilgrimage site to pray to the saint for rain. Keep an eye out for the cemetery's graves dug into the rock itself around the chapel.

Before you leave, linger before the chapel to see the caves that pilgrims used for shelter, lodging and barns. A reservoir and water channel system provided water. Human faces have been clumsily carved into the rock to repel evil spirits.

Due to the risk of fire over summer, access to forest mountains is regulated from June 1st to September 30 th

The Manivert plateau set the scene for a dramatic event on June 12th 1944.

Young resistance fighters taking refuge together on the Manivert plateau came under fire from German troops, probably after a tip off: 62 people, 26 of them from La Roque d’Anthéron, died in combat or were shot after battle.

The Resistance monument keeps their memory alive near the chapel in Lambesc.

Due to the high risk of fire over summer, access to forest mountains is regulated from June 1st to September 30th
For your safety and the protection of natural sites, please check the mountain range is open before you start your hike: +33 (0)8 11 20 13 13 (local call charge) or Tourist Information on +33 (0)4 42 50 70 74.
Click here for complete information about mountain range access terms.