The opening of the rail station

On 12 March 1888, on the agenda of an extraordinary meeting of the municipal council : the project to create a railway line for the Bouches-du-Rhône departement. 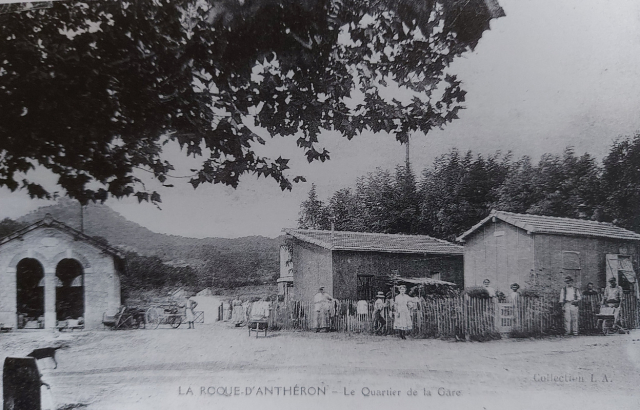 The "BDR" (for railway of the Bouches-Du-Rhône) was created in 1889 and caused a sudden increase of the local economic activity. The rail station  was located on the right of the current Place Henry de Groux. Until the end of the 1920s there were barracks (see photo on the right) occupied by the victims of the earthquake of 11 June 1909.

La Roque d'Anthéron was one of the stations on the Meyrargues <> Eyguières route, 48 km long, a journey that took 1 hour 45 minutes or 2 hours 35 minutes, with a steam locomotive. This railway was operated by the Departmental Railways Company until 1913. When the number of passengers on the line became insufficient, it has been closed closed to travelers in 1936 and to freight in 1950. From 1936, the bus took over and connected the villagers to the communes of the Aix region. Today, the Sports and Cultural Center "Marcel Pagnol", to the right of the war memorial, is built on the route of the railway line. The architecture, which lets light cross this building from East to West, pays tribute to the local train history.