Quickly built, between 1598 and 1667, the castle was limited to one building and two towers. This first castle is only a simple "pied-à-terre" for Jean de Forbin, who came from a noble family in Provence. 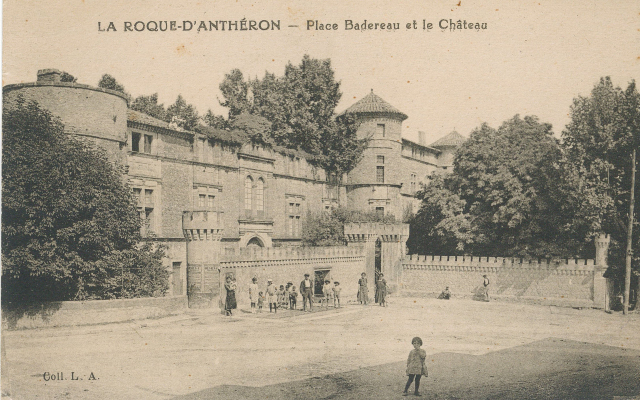 The "public weight" system (note the slab on the ground in the photo), allowed producers to weigh their production in a controlled manner. A mechanism was placed in the turret.

The famous International Piano Festival takes place in the Castle gardens every summer since 1981.

The facade of the entrance gate was only a simple wall until 1965. At a time when it was still necessary to protect against assailants, a ditch forced access to the inner courtyard by a drawbridge.

It was between 1598 and 1667 that the "petit Château" and the "grand Château" were erected at the behest of the powerful Forbin family, principally by Annibal de Forbin Janson. In 1653, the La Roque title became a Marquisate. The Château remained in the Forbin family until 1818, when the buildings and grounds were sold to Louis Raphael of Cordoba, a descendent of whom had married the Marquis de Florans, from a family of the Comtat Venaissan. As a result, the Château de Forbin became the Château de Florans during the 19th century. The 20th century marked an important turning point in the destiny of the Château.
In 1937, Marquess Marie de Florans, last in line and sole survivor from the era, bequeathed the estate to the Archduchy of Aix-en-Provence. A decade later in 1948, Paul Onoratini rented and renovated the Château, rapidly transforming it into a medical and nutritional facility. He became the owner nine years later, thanks to his rigorous management and tireless work. In time, the Centre Médical Soleil et Repos would become the present Clinique du Château de Florans.

Taking great interest in local life, Paul Onoratini was elected mayor of the town of La Roque in 1959. In 1971, assisted by his son Bernard, a piano-obsessed interior architect, he launched "Musique à Silvacane", a series of seven annual concerts. Local cultural organisation the DRAC (Direction Régionale de l'Action Culturelle) soon put Paul Onoratini in touch with René Martin, whose ambition was to create a piano festival in or around Aix. His discovery of the Parc de Florans provided him with extraordinary possibilities. Paul Onoratini was equally enthusiastic about the project. The first Festival was held in 1981.